A Daily Funny for travel with children.

I'm not going to go too much into this right now...I'll post a bit more later...but I had to jump on and get this picture out there.

I've been traveling since I can remember.  I, in fact, had my second birthday in 1978 in South Africa while there traveling with my parents.  Truth be told, I've only had a handful of birthdays total at home, or, more to the point, in this country.  I'm, what you'd call, an expert (self-proclaimed, of course) in air travel.

From those of us who've been traveling a while to those who've never been on a plane, kids on airplanes are a HUGE red flag!  And this is from someone who has a young child!  Of course, we all would like to have the best case scenario...a child that behaves, is quiet, and does the trip like most of the adults on the plane (even though there have been adults on air flights that have acted worse than ANY child EVER on an airplane).  In a worst case scenario, you are dealing with the constant crying, kicking of the seat, air sickness, and general malaise that is associated with children in these situations.  Personally, I've not had much of that, but I know that it exists, or the picture below wouldn't have the impact that it does.

Which leads me to this point.  Parents!!  I'm talking with all parents of children, whether it's a newborn or a teenager.  Control and decorum must be maintained on a flight.  99.999999% of people on that flight already assume that you're child will cause a problem.  It's your job to help the situation as much as you can.  Bring distractions, interact with your child, schedule cockpit visits, ask for items from the fight crew...anything to help the time go faster.

This set of parents, however, deserves a prize for their solution.  They've taken the "Baby on Board" concept that lets you know if there is a child in the car to a new level.  They've created a pre-fabricated, ice-breaking, absolutely GENIUS handout for the flight.  Take a look: 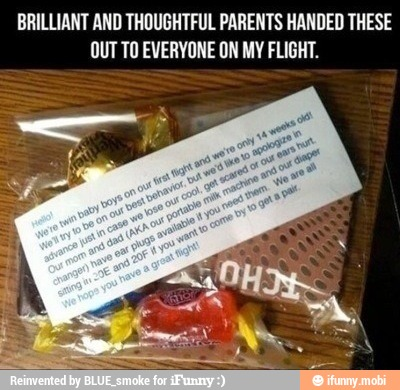 I apologize for the blurry and grainy texture of the pic...I found it on iFunny.  But this is fabulous!  They took what has the potential to be a hot button situation on that flight and turned it into not only something funny, but something that basically takes the fight out of everyone on that flight!  Well done, parents!  I wish I would have thought of this (although my little princess has been wonderful on our flights :) ).

You can come up with your own wording (we had Vidiya at Disney refer to us while she was talking with my daughter as "The Rentals"...that would be funny), your own inclusions, and take it as far as you'd like to.  It can be expensive, sure, but I think its a small price to pay for turning a situation that can cause much strife into one that embodies the old adage "It Takes A Village....".

I wish I knew who this was because I would definitely shake their hand and thank them for their thoughtfulness.

Until next time, have a Magical Day!